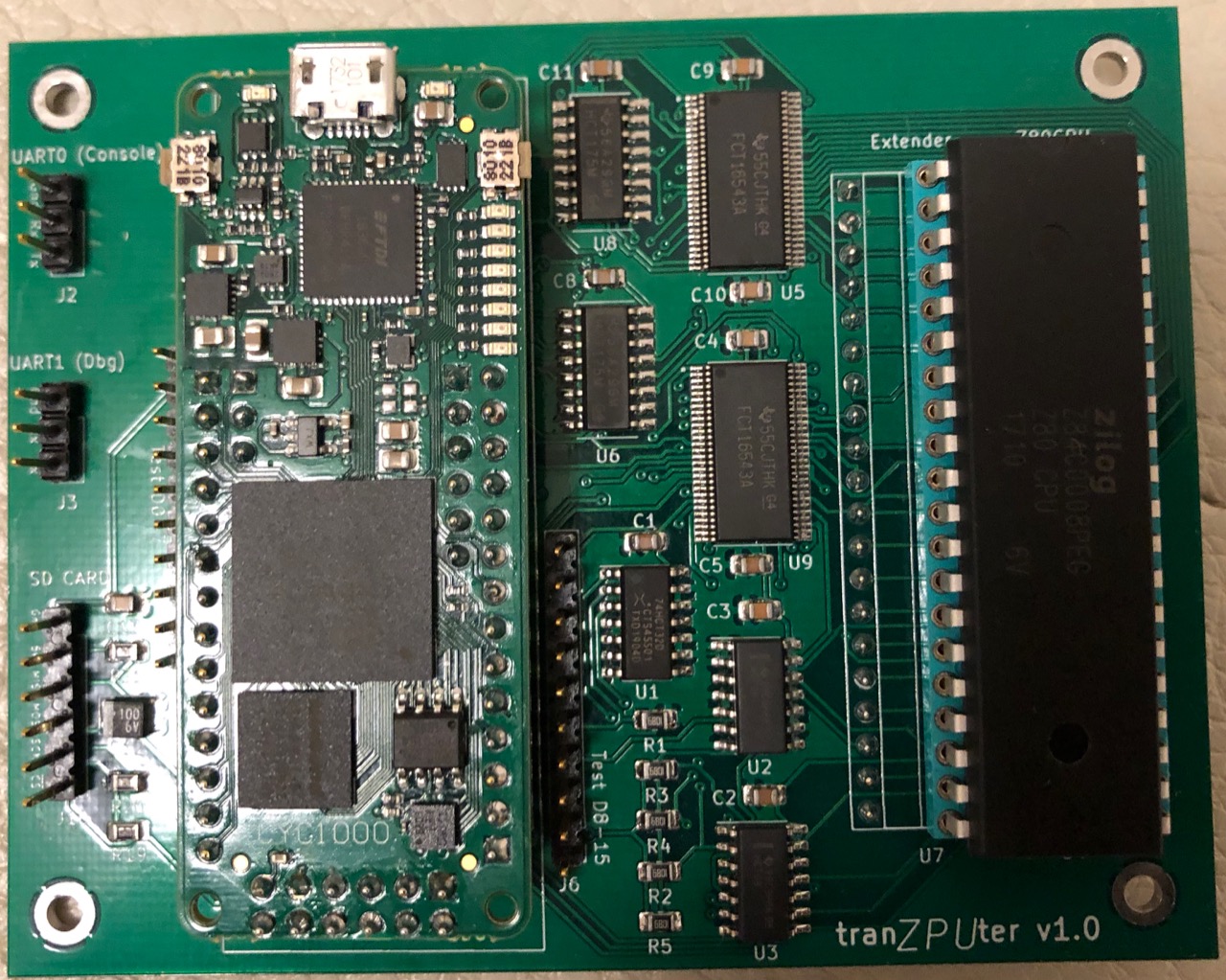 The tranZPUter is actively being developed and will be reflected in this document.

The Sharp MZ80A is based on the Z80 CPU running at 2MHz. It is vintage and under powered compared with modern computers (or a Raspberry Pi). Besides being part of history, it has a software base that is useful from time to time and still has followers. A software Emulator could be written to prolong the usage of the software but there is something special about using original hardware and this is an alternative to keep the machine original yet provide an upgrade that can power the machine with multiple different CPU’s (in FPGA, ie. ZPU, 68000 etc) and also power it with a Z80 running upto 128MHz. This is done by bus mastering where the original CPU is tri-stated and the FPGA takes control of the bus.

Besides providing more powerful and alternative CPU’s and memory, the FPGA can also act as a Floppy Drive, Hard Drive etc using the connected SD Card and provide a menu system by overlaying the video memory when invoked.

This design is still a work in progress, I stopped development when I needed to advance the ZPU Evo SDRAM controller which I had been putting off for a while. The SDRAM is critical as the Cyclone 10LP on the CYC1000 has limited BRAM, only enough for the cache and IOCP Bootloader. Many features have been tested and the schematic/pcb made, it is just a matter of furthering the VHDL now that the SDRAM controller works and to develop the C/C++ code to provide the menu/SD services (already done in the ZPU code base).

I chose the CYC1000 as the FPGA solution as I am not competent soldering BGA devices, also at US$30 it is quite a cost effective choice. For software minded people, it is not that difficult to use a Pi Zero W or similar in place of the CYC1000 just a reworking of the PCB and interface logic, but that is a project for another time.

To provide different CPU’s it is just a matter of mapping in VHDL the softcore CPU signals to the MZ80A bus via this designs interface. The program memory could either be that on the MZ80A or the faster SDRAM. ie. There is no real need to use the MZ80A memory when using a softcore CPU. In my SharpMZ Emulator I run a Z80 at 112MHz using FPGA BRAM but tests show at least 128MHz is sustainable, thus a softcore Z80 CPU running at 128MHz with 48K BRAM slowing down only for MZ80A peripheral access would see a 64x boost in program run, which for say CP/M or database use is very desirable. 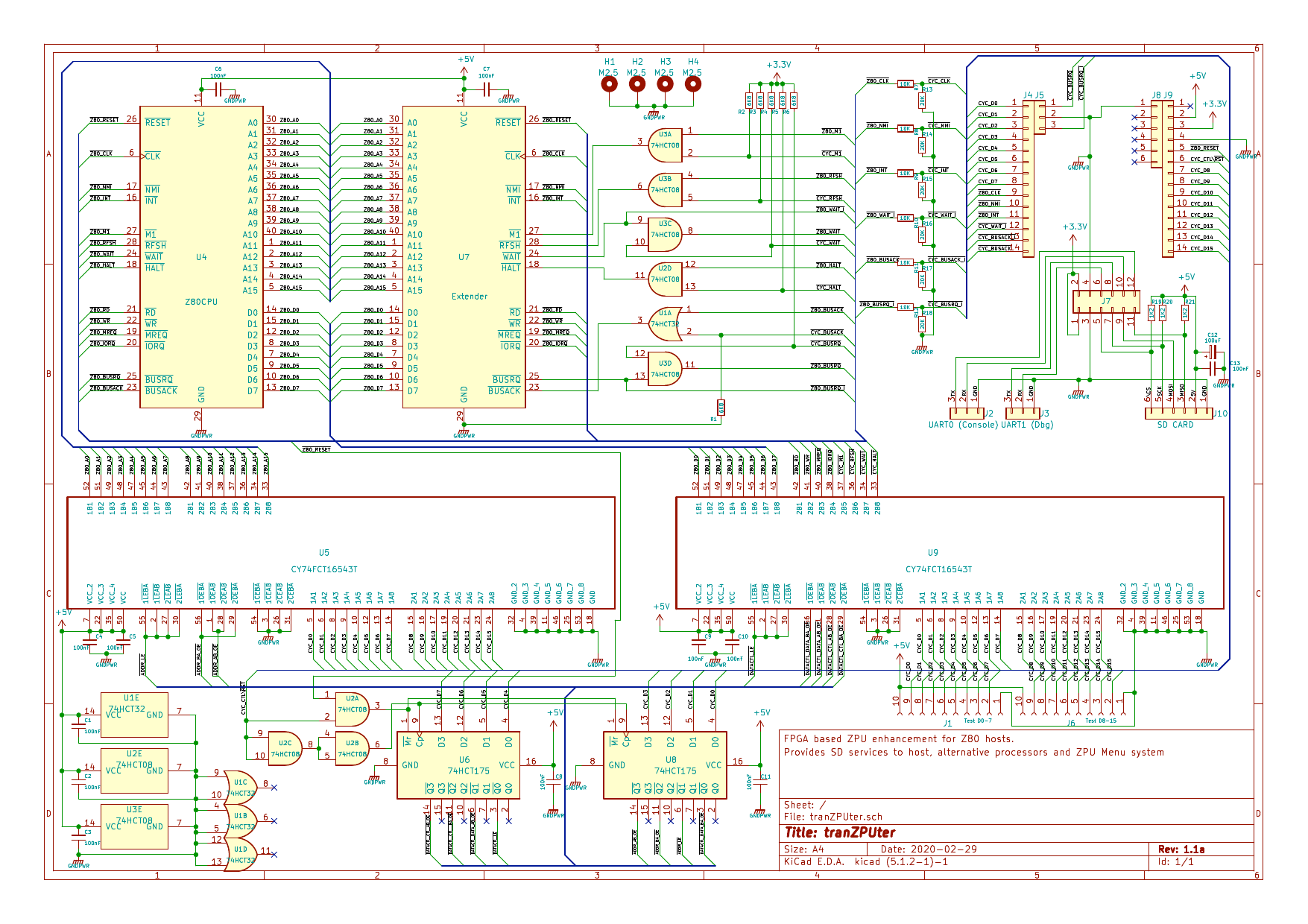 In this design, the bus mastering is used in a similar vein, taking control of the Z80 bus to transfer data between main memory and an SD Card or between the I/O processor and the Video display buffer for presentation of menu’s. It is also used where a soft processor completely idle’s the hard Z80 and acts as the main computer CPU. ie. using a soft T-80 ZPU CPU, it can process applications at 128MHz in local memory and slow down to access I/O and the Video buffer on the host machine.

As there were limited I/O facilities, I had to make use of two 16bit tri-state buffer latches in an addressed mode rather than a 1:1 mode. ie. The Z80 Data, Address and Control lines eminating out of the FPGA have to be ‘set’ one word at a time, ie. write data to latch, write address to latch, write control signals to latch etc. This slows down the speed at which the FPGA can control the Z80 host (to be honest, a 100MHz FPGA can run 50 operations and still match the 2MHz original bus speed) and complicates the logic by requirement of FSM’s in VHDL.