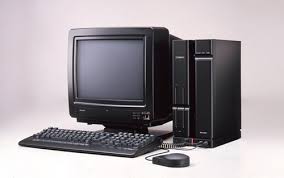 I've recently bought 3 X68000 machines on the Japanese auctions, A grey Expert, a black Expert and a black Expert HD. I originally bought two, like the MZ-2500 so that I could get at least one working and if I was able to make two work, sell on the 2nd. The newer models like the Super, XVI and X68030 were way too expensive given that the machines were marked as 'Junk'! and the reconditioned machines sell for over 1500GBP hence the decision to go for the Expert models. Apart from having SaSI rather than SCSI there is no difference to the Super model and the XVI has a 6MHz speed boost which you can do overclocking the Expert so this, besides the cost and risk was the reason for choice. I later saw an Expert HD model come up for sale and couldnt resist as I wanted to add a hard disk hence having bought 3.

One of the problems with buying the X68000 from the Japanese auctions is they have no keyboard, some will no doubt have been lost but often sellers seperate them and sell seperately, prices achieving as much for the keyboard as the machine itself. I thus investigated options and found a Japanese enthusiast making X68K adapters for PS/2 keyboards and mice so took this route. Recently I saw a grey keyboard come up for sale and as the grey machine is visually in good order thought 'why not' and bid for it, albeit all X68K keyboards are expensive!

So, why a Sharp X68000? History really, having lived in Japan in the hey days seeing these machines in the flesh in Akihabara but not being able to afford one or understand the writing, I just wanted to be able to work with one and see if I could upgrade it with my tranZPUter concept and learn a machine I always wished I had.

The Sharp television department developed the X series machines (X1, X1 Turbo, X1 Turbo Z, X1 Twin, X68000) in direct competition to the business computer division who developed the MZ machines. The X series were more aimed for the home market and were often technically superior to the MZ machines. The X68000 was their piece de la resistence, advanced in every aspect, video, audio, memory, performance, expansion, it was basically the latest most powerful arcade game hardware shoe horned into a gorgeous casing with a keyboard attached.

Take a look at the specifications to understand these comments.