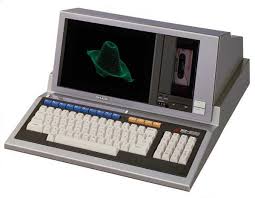 After writing the Sharp MZ Series FPGA emulator with only my original MZ-80B, MZ-80A and MZ-700 machines as reference, using schematics and manuals for the other emulated machines, I decided, having become stuck on the differences between the MZ-80B and MZ-2000 to obtain an example from Japan. Looking at the auctions it became apparent that these machines suffered cassette and monitor issues and the only way to guarantee getting a working model was from one of the reconditioners, but Yen49,000 + all the costs associated in getting it to the UK was prohibitive especially when Customs charges and VAT would be added! I thus decided to take pot luck and buy at least 2 'Junk' MZ-2000's and renovate them, being prepared, if I was unlucky to not get a working example.

Four months later the machines arrived, they initially powered up but one monitor's vertical field collapsed to a single line and both cassette drives didnt work, in fact the pinch rollers were just a yucky tar like substance! So I wasnt totally unlucky but had my work cutout getting these machines ship shape and useable.

The MZ-2000 is a beautifully crafted machine, an MZ-80A on steroids with a lovely keyboard and it adds 48K VRAM for full colour output on an external monitor (via an optional GRAM board).

This machine was the successor to the venerable Sharp MZ-80B but for some strange reason, Sharp opted to not maintain full compatibility, the consequence being that a lot of MZ-80B machine code software wont run. They did however maintain BASIC compatibility so any programs written in BASIC for the MZ-80B would (should!) run on the MZ-2000.

Like most machines from Japan which werent intended for export, the power supply runs at 100V (it will operate at 110-120 so countries such as the USA have no issue). This machine uses a transformer rather than the more recent switch mode supplies so it should be more reliable.

I have tested the tranZPUter SW-700 board in the the working MZ-2000 and not only does it fit, the machine runs reliably. Using the tranZPUter SW-700 requires a few cable adapters and the video GRAM card cannot be installed but the tranZPUter board can fulfill all required video and graphics functionality, in addition to adding many more features such as the Sharp MZ Series emulator.

One of the advantages in working with a real machine is knowledge gained. It is alright working from books and schematics but interacting with real hardware, at least from my point of view, offers a great deal more insight and you have a benchmark to compare an emulation against.

I have held off from finishing the MZ-2000 emulation in the Sharp MZ Series for a few reasons but now I have no excuse. Adapting the tranZPUter SW-700 v1.3 board I can upgrade the Video Module to match the VRAM card and have both to hand for comparison. Any changes I make to the CPLD/FPGA to make it operate in the MZ-2000 will no doubt feed back into the emulation.